Gas and power prices opened bearish this week as the gas system was oversupplied.

The UK gas system opened 21 mcm long this week. While gas prices have been on a downward trend since January, the suppressed gas prices this week can be attributed to high wind output at 7GW reducing demand for gas in CCGT power stations. This amounts to 20% of total generation for wind, reducing CCGT to 12.6GW. Furthermore, temperatures this week have been above seasonal average, however it is forecast that temperatures will drop below average next week, therefore demand will likely pick up again and prices rise.

The network is currently importing around 2.7GWfrom Europe and generating 1.6GW from Coal, this is mainly due to planned outages reducing nuclear power generation to approximately 5.6GW.

Elsewhere, the pound remains flat at 1.16 euros and carbon is trading at 20.73 euros/tonne, a 54% increase on its position last year putting pressure on carbon intensive generation. Legislation tightening supply of carbon allowances has clearly had a positive impact on the policy as a whole, see below for the graph. 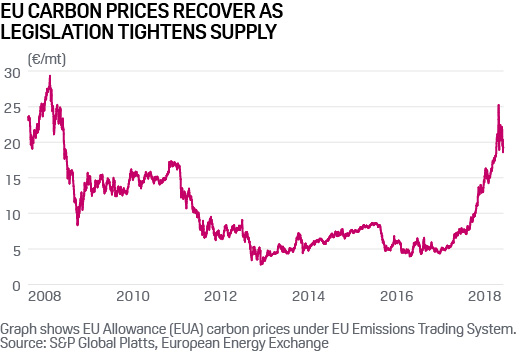